A survey of young Arabs has provided the global community some much-needed insight to slowing down ISIS’ massive recruiting network.

The 2016 ASDA’A Burson-Marsteller Arab Youth Survey, which conducted over 3,500 face-to-face interviews with youth aged 18-24, asked respondents to express their mindset on issues regarding the Islamic State and various other problems in the Middle East.

As a member of the panel discussion during the survey’s launch in Dubai, I spoke about what I believed was one of the survey’s greatest revelations‒ that radical belief or interpretation of Islam is not necessarily the driving factor for ISIS recruits.

In fact, those surveyed listed a lack of jobs and opportunities as the most likely motive for young ISIS converts. This particular response is important because it lays a blueprint for curbing the rapid growth of the Islamic State, which acquires as many as 1,000 new fighters every month.

Eliminating ISIS fighters before they even exist should be a priority. In a white paperaccompanying the survey’s findings, analyst Hassan Hassan notes that capitalizing on disorder is how Daesh (ISIS) came to power in the first place.

“The solution to Daesh must not be limited to military and security responses. The organisation thrives on political, economic, social and religious failures,” Hassansaid. “Daesh may weaken and disappear, but the underlying sickness will remain, and similar groups will emerge if that sickness is not addressed.”

Hassan concludes that groups like ISIS are the symptom of a greater disease caused by war and instability in the region. In other words, violence and political upheaval has compromised the living conditions and educational opportunities for millions of young Arabs, making them more vulnerable to radical influence. The survey’s responses sent a clear message— young people in the Middle East know they are being marginalized while leaders focus on trying to improve religious tensions within the region.
“Across the Arab world, over the past several decades, leaders have failed to deliver the goods for their citizens, especially young people,” said author and geopolitical expert Afshin Molavi in the survey’s white paper. “Of these ‘goods,’ the one most prized by young Arabs is simply opportunity. The opportunity to reach their potential in a secure, safe environment, free of corruption, and open to innovation and creativity.”

More than 30 percent of Arabs under the age of 30 do not have a job, according to the director general of the Arab Labour Organisation. A lack of jobs has become one of the most difficult hurdles for the Middle East, where the unemployment rate is more than three times the global average.

The Islamic State appears to exploit this regional vulnerability particularly well, sending prospective recruits ISIS job applications that include typical employment inquiries such as education level, current employer, and personal references. The survey responses provide further evidence to the notion that desperation for income and purpose in life may be pushing young people to join a dangerous cause they don’t believe in.

Other responses from the survey also indicate that the ideological beliefs of ISIS are not popular among young Arabs. Only 13 percent said they could imagine themselves joining ISIS even if it was not a violent organization. A majority of participants cited the rise of the extremist group as the greatest problem in the Middle East today, which comes as no surprise from a generation that grew up witnessing the Islamic State’s atrocities firsthand.

Despite the Arab youths’ general rejection of the Islamic State, many are still swayed by the group’s notoriously aggressive and deceptive recruiting tactics. Terrorist agents lure prospects in using drugs, money, and glorified promises of a better life. ISIS supporters create tens of thousands of social media accounts every month aimed at influencing anyone who will listen, especially those left vulnerable by the turmoil of war.

It’s no secret that the key to creating stability in the Middle East is de-escalating tensions between those with opposing religious views. A majority of the Arab youths surveyed agreed that religion plays too big of a role in Middle Eastern society. The region’s leaders often work against each other, when what is really needed is a leader who is willing to bring everyone to the table— a leader who opens the door for compromise and coexistence, rather than feeding into anger and difference of opinion that fuels ISIS ideology.

“Growing sectarian tensions in the Middle East strengthen the extremist narrative of Daesh,” Hassan said. “[Which is] that Shia are the enemies and conflicts involving Iranian-backed militias from Yemen to Lebanon are part of a wider war against Sunni Muslims.”

Although the Islamic state has been losing territory as of late, their attacks remainas prevalent as they’ve ever been. Considered by some to the most effective recruiters in the world, ISIS’ dominant social media blitz has led to some leaders calling for a ban on encrypted messaging apps used by the terrorist organization. But reports have shown that at least some sects of ISIS are savvy when knowing what lines of communication are safe from prying eyes.

Banning social media platforms would also likely undermine Arab Youth who use social media as a replacement for their lack of a public forum, allowing them a place to express their unadulterated opinion.

“This is not a complacent and subservient youth that feels constrained by the governing practices of the past,” said Dr. Christian Koch, another contributor to the survey’s white paper. “Rather, it is a youth that actively seeks a broader and deeper role for itself in shaping its own environment and the societies in which they live.”

The Arab Youth Survey itself is a testament to the benefits of giving a voice to the common people. The poll has given us a glimpse into the mindset of young people all over the Middle East, and the results show a generation that yearns for a fair chance to make their impact on the world they live in.

Giving them that chance before ISIS can, however, is up to us. ASDA’A Burson-Marsteller founder and chief executive Sunil John echoed this sentiment. 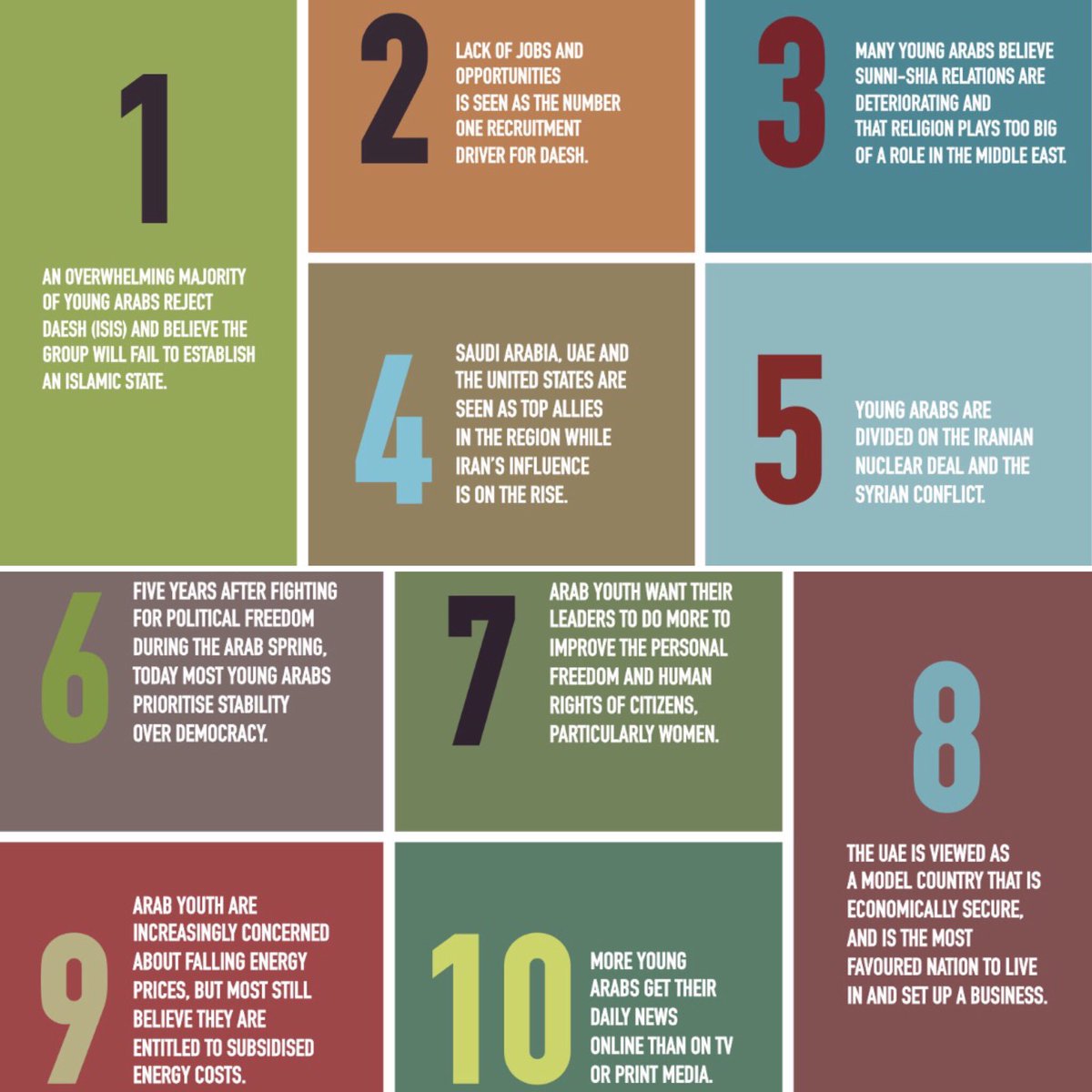 Young Arabs need Opportunities + #Diplomacy + Freedoms. It’s only then that we can hope for #peace. #ArabYouthSurvey

“There are 200 million young people in the Middle East and North Africa. Always spirited, often frustrated, they represent either the region’s biggest dividend, or its biggest threat,” Hassan said. “It is my personal view that they are a dividend; a wellspring of untapped potential to rival any oil or gas field, and a net benefit to the region and the world.”